Breakfast, from earlier this week:

Don't you wish you were here for that? --Even better with a little fresh-ground pepper or some hot sauce.

And then we have a brace of Savage .32s! On the right, my Buy-A-Gun Day purchase; on the right Marine right, also known as left, the one I bought some while ago. (Huge pic, so you can click and drool if so inclined). 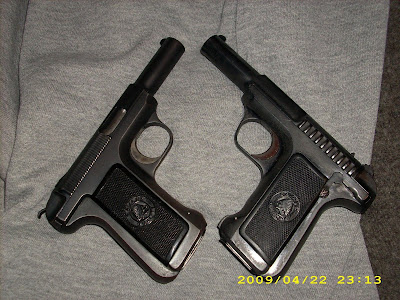 Similar and yet very different: notice the spur "hammer" (actually a "cocking lever," as this is a striker-fired gun) on the left and the solid, round one on the right; fine slide serrations left vs. coarse ones right.

And the rear sights! On the right, a conventional dovetailed-in notch; on the left, there a bit of a bulge atop the slide near the rear, and that's got a square notch milled in it, nicely faired in. On both of them, you can't see the sights if the striker isn't cocked.

The magazine releases are different, too. It's at the bottom of the frontstrap, clearly visible on the right example. On that one, you press with your pinkie and the 10-round double-stack magazine drops free. On the lefthand version, you press with your ring finger -- the pivot point is the same but the direction of travel is reversed! All later Savage magazines have two catch openings, so they'll work with either method. (It's difficult to find good magazines for these guns. The most common aftermarkets ones are, ahem, sub-par).

Savage also offered a loaded chamber indicator, which neither of these guns has.

They are about the height and length of a S&W pocket hammerless .38, while just over half the width; not bad for a very early 20th Century design.
Posted by Roberta X at 10:47 PM

Wow...neat!! Those Campbell's soup bowl are about as old as those pistols, aren't they? Nice bowls.

Is that "on the right" and "On the other right" or am I missing something?

I had every intention of buying a gun on BAG Day, but I was in a gun shop earlier this year and spotted a `42 Izveshk Mosin-Nagant that was an ex-PEM sniper.

So I advanced the calendar.

Thought that said "Breakfast of Savages" at first....

Hot lead is the Breakfast of Savages, Joseph!

I thought I should come here and apologize directly for having ragged on your Savages today at Tam's, and I do hope they survived the exploratory surgery at her hands today.

Actually, though, I somehow think my having called them "buttugly steampunk contraptions" would be taken by you as high praise rather than the intended defamation.

And that is good. Ugly guns, like ugly girls and (ahem) ugly guys, need love too.