...Not right on the 15th and there was transit time involved; and I'm going to count the changes made to my Sistema as part of festivities.

On the right, below, note the unblued Cylinder & Slide hammer, the only externally-visible part of their fine M Corps drop-in 5-piece hammer set. Like any "drop-in" parts, it took a little work, mostly chucking up the pins in a hand-powered drill while applying various grades of hone with frequent stops to check the fit. Swapping out a mainspring was a new and different experience as well and one that brought home how very badly I need to clear off and finish setting up my main workbench.

The completed pan-American 1911A1 is one of the nicest of the breed I have shot (helps if it is your very own and this is my first true 1911); it cycled a hundred rounds with one failure (a bad sub-stovepipe jam -- operator error?) while chewing out the center of the target at 20'. I had five flyers. In a hundred rounds. And they were due to my mistakes. My successes, on the other hand -- the Sistema's in good shape and having the example and advice of Tam and Caleb has led to marked improvement in my own shooting.

Can you name the shootin' i-ron on the left? 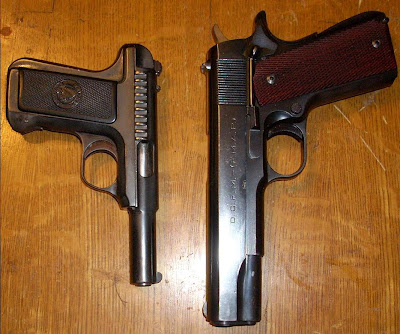 Yes, it's a Savage autopistol, Model of...1905. Or '07 or 1910, depending on how you score it. My second one and a whole other variation, pix to follow. It's a nice little .32ACP (they were also made in .380) with an early double-stack magazine -- 10 rounds for the .32. The controls and operating system are unique to Savage; among the more salient points are a nice low bore axis and a grip angle that results in a very naturally-pointing sidearm. These little pistols outsold Colt's corresponding models in the years leading up to WW I. (There was a .45 version, which went up against the 1911 in Army trials. Came in second, which is to say it lost. Scarce today and commands insane prices when found).

And that's my Buy-A-Gun-Day gun. Had to transfer it in from out of state and just picked it up today. Naturally, the gun store was all out of .32 ammunition.
Posted by Roberta X at 7:28 PM

You put the C&S parts in yourself?

I can't really afford to have a gunsmith do it.

While the Army's competition for the pistol contract wasn't quite as rigged as that for the Garand's replacement, Colt went into it with a huge advantage. JMB's design would have had to have been an utter failure for Savage to have won.

Even if it had been adopted, I don't think the Savage would've had near the service life the 1911 ended up having. JMB didn't stop designing pistols with the 1911, and I could see the Savage having eventually been replaced with a 45 caliber Hi-Power derivative.

The strange sound you hear, is me kicking myself around the block. I actually had several opportunities in those 80's to buy savage .32 and .380 pistols for only a two figure price tag. Now I've scored .45s for cheaper than AA or GB auctions them off for.

Hindsight's 20/20 John; I passed up Colt "Government .380s" at least twice at half the price they now command -- of course, right now I would hardly have been able to shoot it, given the shortage of .380.

Butch: Tam and I debated the likelihood of the Savage's adoption. I field-stripped it to show how easy it is -- and she pointed out that unlike the 1911, you cannot detail-strip the gun without additional tools. Plus it has a much higher small-parts sproing factor than a 1911. Nifty as the Savage .45 was, the Army made the right call. I suspect that had they adopted it, it would have been replaced by...some version of the 1911. The 1911 does have more pins to lose but that's one of the simpler items to replace.

"You put the C&S parts in yourself?"

Heck, I installed the C&S kit in my Sistema myself, and I'm all thumbs compared to Bobbi.

The catchy ad copy for the 1907 Savage Auto was "Ten Shots Quick!"

I never checked, but the price on 'em had to've skyrocketed after Road To Perdition (2002)featured one being prominently used.

My BAG purchase was a Kel-Tec PF9. Thought long and hard about a Kahr, but at half the price I get the same size and weight. That sort of pocket piece isn't a big shooter, it's a have it handy sort.

Two weeks earlier I picked up a DPMS Sportical, AR-15 clone. Tricked it with SureFire light and EOTech red dot.

Bad news is two weeks ago the shortage was of .380. Yesterday all the web sites for ammo were out of 9mm, .45ACP and .223 except for a few expensive, exotic special purpose types.

This is a developing story for sure!

Plenty of room to prefer the Savage or Remington over the Colt pockets. I know,

And I agree about the Savage .45, not nearly as good in any way as the Colt entry.

Cool; you got a lovely flat Colt and my BAG Day purchase was a round Smith. Maybe we'll catch up with Tam some day (but for the rest of this year I'll be buying mostly ammo and practicing with what I've got).

wv = knuti; that's probably what I am for writing of catching up with Tam. ;)

Added to clarify: I understand that the Sistema wasn't made in Hartford, but just that (IIRC) that's where the machinery and the supervision originally came from.

You and your Roomie are bad influences.
I'm just a normal, red-blooded, tithing member of the Church of JMB. No need for those 6-shooters. A few years ago I bought a Taurus 605 for a backup CCW and a car-gun. Then I decide that wheelguns can't be too awful since I keep seeing Sunday Smiths and since even Xavier has one or two... so I break down and picked up a 325PD last year.

I head out to do my late BAG day/Patriot day duty, trying to decide between a commander sized 1911 or blaspheming and going with a 9mm 1911 - researched and have it down to an offering from Kimber or Springfield, depending on what was in stock.

Then I see it - a blue velvet lined walnut case with a blued revolver, brush, mop and screwdriver. S&W 19-3 4 inch. No stupid hammer lock, Firing pin on the hammer, rich bluing, nice figure on the grips and I'm struck with an unholy lust. A Para PXT called out to me, and there was a Kimber Stainless Target II in 9mm looking all pristine and pure, but the Model 19 was winking and started taking dirty. So guess who came home with me..
I hope you and Tam are satisfied!