Or, "Why, Yes, It Is A Bleg"
Power went out about 7:45 this evening and was off for half an hour. (Back now but it keeps flickering off and back on). About fifteen minutes after we lost power, a major storm front blew through; Tam and I had been outside and barely made it in ahead of falling limbs pursued by a wall of fat raindrops (a neighbor across the alley had a tree down over their neighbor's power drop and workers had been removing it; they loaded up their truck and lit out when the lights went out!).

The winds got stronger once we were inside. After rounding up flashlights and candles, Tam adjourned herself to the porch. 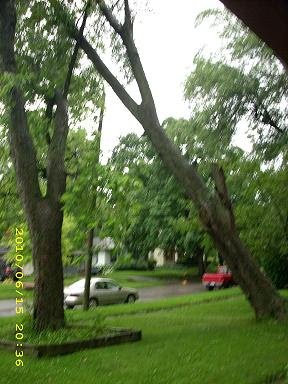 She was no more than out the door when I heard, "Uh-oh."

...There are two trees in the front yard at Roseholme. Tree number one stands square in the middle and sends a limb out to menace the streetlight. Tree number two's had a hard life. Mostly hollow, it lurks back nearer the cottage, just inside the property line, as though it was unsure whether to flee or try to get under the house to hide. It's got a job, holding up one end of my ham antenna (a G5RV, guys).

That is, it used to do those things. The wind took hold of it, popped it free of what was left of its roots, and leaned it right into tree number one. The leaves are still green but that tree has shuffled off its mortal coil; it has collapsed into the arms of its brother-in-branches. It hasn't taken down my antenna, it didn't fall that far (yet?), but it's going to need to be taken down and hauled off to the tree morgue.

The porch --The Porch where Tam muses -- is not presently safe. And I'm kinda worried for our mailman, too.

I had not really planned on this and will therefore, somewhat abashed, remind concerned readers of Tam's tip jar. The unfortunate tree's gotta gotta go and payday's awhile off yet.
Posted by Roberta X at 9:23 PM

Email ThisBlogThis!Share to TwitterShare to FacebookShare to Pinterest
Labels: marvels of nature, things that should not go bang

Wow! Glad it didn't hit the house...or The Porch.

This is a cause I can get behind. Tomorrow, on a wired connection, mind.

If you have tree guys cut it down and it's not too rotten, I'll gladly convert all that wood into ash and smoke this winter. =]

It's pretty rotten, Red, but you're welcome to it.

Your comment about the tree's indecision reminds me of Dickens telling us about the location of Scrooge's house - "...one could scarcely help fancying it must have run there when it was a young house, playing at hide-and-seek with other houses, and forgotten the way out again."

Ah, too bad you're so Mid-Westernish. I've been removing such things from people's yard lately, doing the Craig's List free firewood rounds.

Normally, they're already completely down, but that'n would be easy to finish up.

So anyway, round-about way of saying that's you're best bet for cheap or free removal. Post it on Craig's List as free firewood- but require removal of all of it, unusable branches included.

I'm too lazy to do manual labor, hit the tip jar instead.

DW: Totally. If I can afford his services!

..And my profound thanks to eveyone who's hit the tip jar. First estimate is already in, just under $1K. A lot, but not as mach as I had expected.

Holy crap that's a lot of money. I had an arborist come out couple-three years ago to remove broken limbs on a very large douglas fir- thebroken limbs were damaged during a 3 day freezing rain/ice storm, and were up to 10 inches in diameter (the branches) They had to be removed starting about 15 feet from the ground up to 35 feet above the ground. All within a similar distance to my house and with landscaping beneath the tree.

A guy had to actually use spikes and a climbing belt and cut limbs close to the trunk with a chainsaw in that rig.

He then removed all the non-firewood material.