So, They Showed Us Air 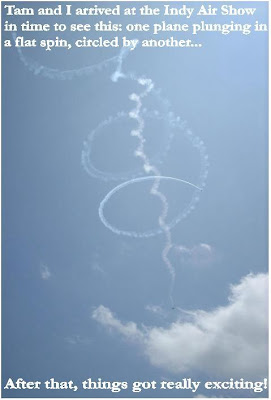 Exciting and very, very busy in the air.

Should they be doing that? Even the golf-cart guy is wondering. (Yes, and if I had a faster camera, I'd've caught the nifty close encounter).

And then there are The Horsemen, the only P-51 aerobatic team presently around. On the ground, oh so pretty:

In the air? Breathtaking! 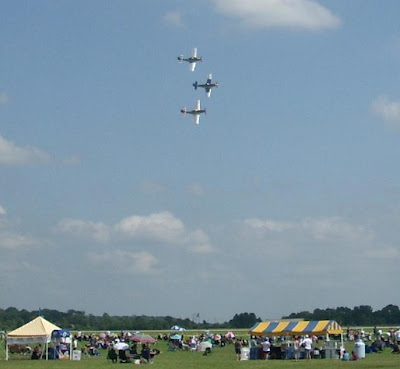 There were other things besides airplanes, too. For instance, we can be certain that the big anti-tankish kind of rifle at the front of this collection of British WW II weaponry is a Boys rifle: 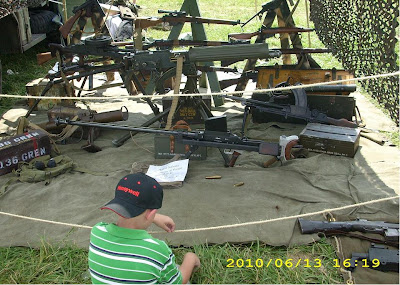 ...Seeing as how it's already attracted a boy!

There was also a Warthog doing interesting things. They don't make a whole lot of noise -- they're designed not to -- but the sound they do make? Chill your blood! 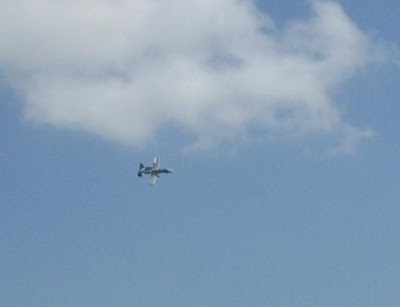 It didn't just fly around, either: 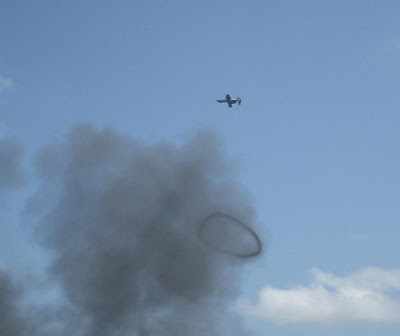 The smoke (and delightful explosions preceding it) were effects; seems FAA and other such outfits, not so fond of even smoke-bombing audiences. Still, the message is clear: if you have one of those, you can make as many smoke rings as you want!

One last photo for now, snapped out the car window as we made a 5 mph exit; I just matched the attitude and tripped the shutter without looking. It's not the clearest but that's an A-10 being escorted by P-51s. Y'don't see that every day! 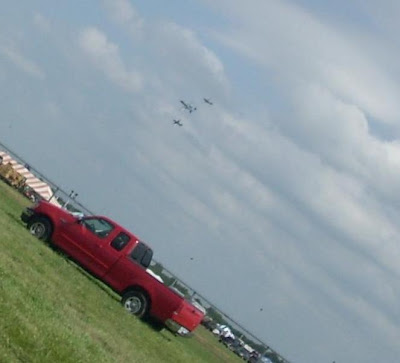 There may be still more photos, later, like the devilishly-handsome "German tank commander" and his tank, a kind of kit-car version of WW II weaponry...but it's hardly on a VW chassis! Or snapshots of Yankee Lady and Hot Stuff (WW II bombers, as if you didn't know). Tam and I had quite a fine time, despite fit-to-melt'cha heat with a big side order of humidity. Well worth it! (SB, ol' pal, you shouldna had a flat tire. You missed out -- even your old branch of service was well-represented there).
Posted by Roberta X at 11:18 PM

Sounds (and looks) like you had a good time, beautiful. I'm more than a bit envious, especially over the P-51s.

Airshows are fun, even the ones I had to work (grumble, grumble).

I spent several years stationed at a base with A-10s. It was like having a mini airshow several days a week.

The engine sounds were... distinct.

Thank you for taking the time to take and post all the photos!

There's a correlation between lovers of shooting and techy stuff, and P-51's, but I can't describe the calculus for the proof.

If you got there early enough, you would have gotten to see the F/A-18 do some passes over the fight line. Due to the humidity (somewhere around 200% or so) most of the high-speed passes resulted in shock cones forming around the plane. Really cool!

I'm gonna have to take my kids to that.

When I was a kid, A-10s used to fly over my house every few weeks. You could hear them maybe a minute before they flew over, and they were LOUD, and then they were gone.

Was that a Boyes Anti-tank rifle? I seem to remember the Brits used those during WW2. Also, there's nothing like the sound of Merlin engines at high rpm ripping along just about ground level. That is a sound you'll never forget.

BTW, when is the blogmeet this month?

Ah the A10 Warthog. The only aircraft in the inventory that can sneak up on you, and the big cannon on the nose sounds like a big giant fart.

I have always said that it is vastly under-appreciated. I think the USMC should adopt a slightly modified version to use for close air support (mostly a tailhook and folding wings for use on an aircraft carrier). Yes, I know it's a tank killer and that isn't the Marines job, but the A10 would be super in a close air support role.

I was the head intel geek for an A-10 squadron, once upon a time. It may be the only aircraft in the inventory that records bird strikes from the rear, but when it absolutely, positively has to be destroyed RIGHT NOW, nobody does it better.

All that was missing to make it a perfect airshow was a P-38 or two. I'm envious - while we have a decent air show here in Atlanta, we don't seem to get the A-10s or P-51's down here...though we do get the Blue Angels now and then.

There was also a Warthog ... (t)hey don't make a whole lot of noise...
You've never heard one on a gun run.

You evil woman. :-) You're making me itch again, and I can't afford a warbird or a piece of armor of my own!