And conviently under the same roof!

Sunday, Tam and I went to the Kokomo gun show, put on by Central Indiana Gun Shows, who have shows at (or near) most of the larger county seats throughout Indiana. (It appears there are at least four different gun show promoters in Indiana, so any given weekend, there's likely to be one within driving distance.)

It was larger than we'd expected and even on Sunday, there were some nice items to be found. Tam found a-- Wait, that's hers to tell! I found this: 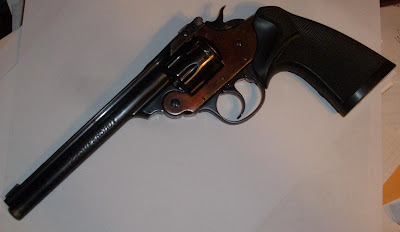 Yes, it's another Iver Johnson top-break 22 revolver. (On which someone, somehow, managed to find and install Pachmayr grips. This would not have been my first choice but they feel okay). The one I already had was a Model 844 and it's gone finicky (and headed for the 'smith); this one's a genuine "Supershot" model -- and not a "Sealed 8," as the cylinder is not counterbored. That, the "plummy" blueing on the frame and the four-digit serial number leads me to think it's an older example. --I admit it: I have a weakness for top-breaks. And .22s. I just need the Iver Johnson bicycle to match! (And not an I-J motorcycle? Nope; while among the finest of their time, they are also as rare as hen's teeth and command prices to match. It would be too dear to ride).

From the gun show in one side of the building to the Kokomo Automotive Museum in the other.

It's a huge space, with a very comprehensive collection, starting, of course, with a copy of the Elwood P. Haynes original, probably the first such vehicle in the U.S. Haynes started small but turned to building lovely, big cars and even trucks. 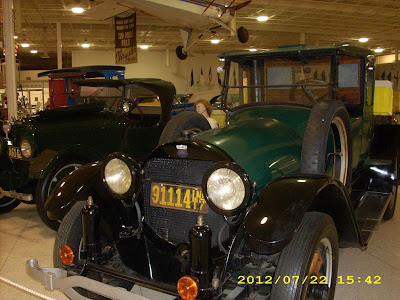 At least until an economic downturn tripped them up in 1924. But by then, Indiana's auto industry was in full swing; Ford even built vehicles at a plant in Indianapolis. 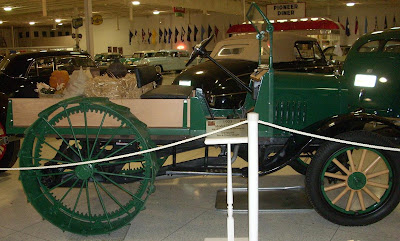 I don't know if this is one of them. My father was fond of pointing out that there were still "NO LUGS" signs posted on Indiana State Highways here into the 1960s. Have a close look at the lugged rear wheels and their gear-offset drive, a feature that was to show up again decades later in Indiana manufacturer AM General's HMWWV.

There were several Ford Model As, though no truck versions. (Yes, I still want one -- I think the Model A is one of the better-looking cars ever built).

Still in my camera, some gorgeous Packards and a couple of Chevys -- and a very interesting Fisk Tire sign. That'll have to wait until later.
Posted by Roberta X at 6:37 AM

Old guns and old cars. What could be better?

Apologies for the extra letter "t" in the previous. No offense intended to the Neo-Victorian sensibilities. I just need one of those retro keyboards, with the lively action of a Remington upright.

And another Moxie. A neighbor grabbed me off of my porch and drug me to the used bookshop, with a big discount coupon. We got great folks here in Houston too!

I went over to the last one they had and then I too went through the car museum.

Boy that car took me back. It was just so cool...