I made it to Eagle Creek Pistol Range yesterday, an hour before closing. The plan: Check out a recently-purchased revolver or two.

Despite liberal application of Break-Free CLP, the Supershot 22 is kind of stiff and slow; I think it had a long, long nap. The action must be worked quite vigorously to ensure the hammer hits hard enough to set off the primer -- but if I keep the teeny-weeny Old School sights lined up, it is spot-on accurate. So that's a good sign and it's off to the 'smith for a checkup and cleaning.

I shot my High Standard Sentinel .22 revolver and the little H&R 623 "pull pin" .22* awhile to remind my hands and eyes of how things are supposed to work and after a half a box or so, tried the other "new" purchase, which showed up at Gander Mountain at a giveaway price: 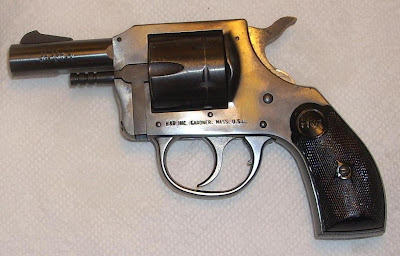 It's an H&R in .32 S&W Long, under $150 after their weekend sale discount. The photo is deceptive: the frame and barrel is blued and in pretty nice shape; the hammer (in the white) has some surface rust that should polish off. (So why so cheap? Odd caliber, plus a manufacturer other than The Big Two, I suspect, plus it's hardly pristine.) Update: Online research indicates it was made in 1979, so the stocks are probably just space-age polymer rather than Bakelite (in-joke!) or gutta-percha.

At the price, I wasn't expecting much. Indeed, it isn't a "natural pointer" in my hand -- but as soon as I started trusting the sights and ignoring the feeling that it was aimed way low, it was putting holes right in the center of the target. The DA trigger pull is quite heavy but smooth enough. .32 S&W L isn't exactly one of the hottest cartridges out there, with the zippiest ambling along at 723 ft/sec, delivering perhaps a third the energy of a "cowboy" loaded .32-20 and a hair less than .32 ACP. But it has a good reputation for accuracy and would be an adequate purse or back-up gun. Or simply as a range gun.

So a fun hour at the range, alongside the usual Eagle Creek mix -- an older couple with a shiny, shiny Beretta 96 to my left, possibly early in their learning curve, a younger guy to my right with a 22/45 methodically removing the center of his target and folks with all manner of small arms and skill levels on down the firing line.
_____________________________________
* This is actually a lazy trick: the H&R is a six-gun, the High Standard is a 9-shot. CCI packs .22 in rows of five, so I can dump out three rows and load both with minimum fumbling. I think the H&R 623, another low-priced find, is a real sleeper; the sights are good, DA trigger pull is smooth and easy and the felt recoil seems to be lower than any .22 revolver I own. (Mine was made in 1958. And I found a reproduction instruction booklet for it!)
Posted by Roberta X at 6:39 AM

+1 if those are gutta percha stocks!

sounds like a good time was had by
all.

like someone else, i enjoy firearms which are more than 50 years old.

Ms. Bobbie, you cause a lump in my throat. Not because you own these firearms, because you respect them. And, I mean that. You are very intelligent. You will need to ignore me, for now. I need to sleep.