Late To The Party

But considering the ill-tempered the guest of honor, I'm not all that worried about lookin' rude. Say hello to the FBI: 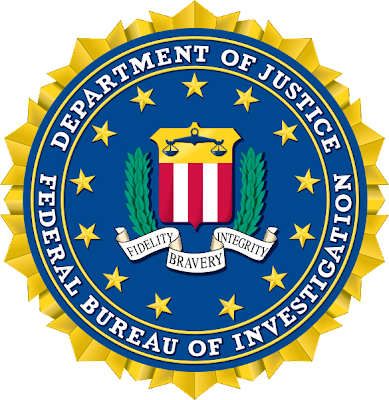 The image should take you to a nice Wikipedia page, describing the history and symbolism of the seal and its copyright status. Take particular note of the scales, which stand for justice -- and even more so, for equity, for balance: fairness.

As you have read elsewhere, days ago, our very own, tax-funded Federal Bureau of Investigation sent Wikipedia a "Take it down!" letter asserting copyright, allegedly motivated by fears bad, bad men will use the Wikipedia image to pretend to be Feds. (Wow, I sure wish there was a Federal bureau to, you know, look into such things and bring the malefactors to book, but I digress). One thing to remember here is that there are a lot of holders of law degrees to be found among FBI agents -- not that there would be any adventurist bottom-feeding stalwart assertion in re copyright going on amongst members (in several senses of the word) of the legal profession anywhere else.

I wonder what else might we find, were we to go image-shopping on Wikipedia? What other innocent, defenseless Federal agencies have been exposed to the horrors of internationally accessible hi-rez images of their public-domain seals? Even scarier, do they have children's pages or a public museum? 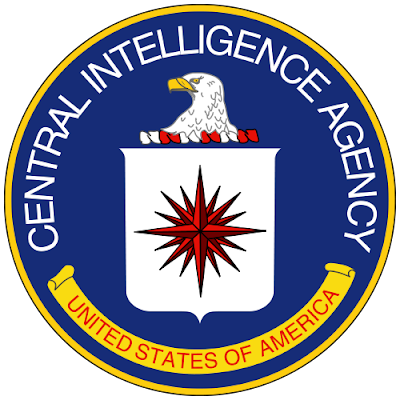 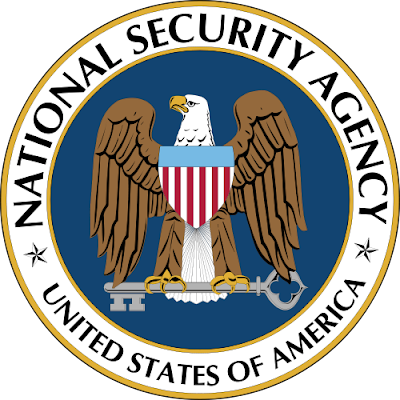 Oh, nooooooes! (Images take you to their respective homepages. Pretty sure they're hirin', btw -- NSA is pushing gummint careers right there on the front page, though applicants need major alpha geekage and the ability to keep your yap shut, the second hurdle leavin' me right out if by some miracle I snuck by the first).

Of course, this does cause me to wonder: have CIA or NSA sent letters to Wikipedia? Does the eagle hunt the fly? 'Twould appear not. So unless the principals of Wikipedia suddenly vanish (while outside the borders of these United States), or all of their servers and every record of them from birth to their last bus pass suddenly and by complete coincidence are deleted without a trace, I think we can safely conclude FBI's best known, scariest two siblings don't have a problem with reference works posting their public-domain seals out where people can see them. Maybe they're getting better legal advice? Maybe they remember the ease with which the eagle can take the fly and, grasping the imbalance, stay their hand?

I dunno. But I remember now why I didn't like goin' to parties with crybabies and fibbers when I was a kid.

J. Edgar Hoover is dead. Somehow, somewhere, some of his least-noble qualities have lived on.
Posted by Roberta X at 1:29 PM

Email ThisBlogThis!Share to TwitterShare to FacebookShare to Pinterest
Labels: eediots, marvels of politics, RTFM, What Would Gutenberg Do?

When I worked for a newly-created alphabet soup agency a few years ago, my team wanted to get hats or shirts or something made up for morale. We were told we couldn't have a copy of the seal to use, "because, well, it's secret". Of course, the only place we found it was on the letterhead, the website (such as it was) and on a paperweight on the building manager's desk (not the boss). Pretty much sums up my employment with that group.

Sounds about right. They should have strangled the artist who came up with that seal, anyway. :)

...I was reminded, looking at their website, of one of NSA's most admirable qualities: as an institution, they do not whine or wheedle; such of their history as is not classified, they share, good and bad, without apology.

Their museum is porportedly amazing, in a geeky way.

Considering their nickname (No Such Agency) and Cold-War history, driving down the BW Parkway past Ft. Meade and seeing the sign for NS Next Right, Employees Only bold as brass is worth a chuckle in its own right.

WV: hargende - Har Agende is to control the information