The ringmaker with leg vise, mandrel, hammer and a box'o'nails: 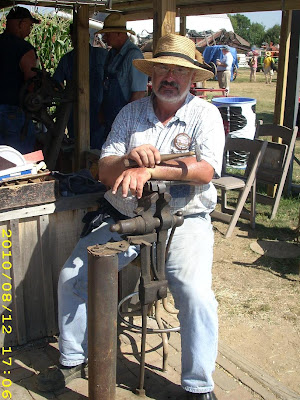 Tiny tractor, with about 100 psi of steam up. It's even smaller than it looks, the steering wheel not quite a foot across: 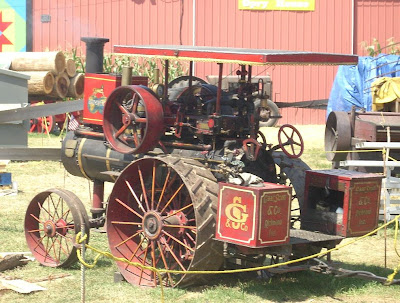 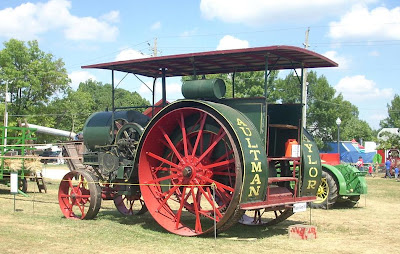 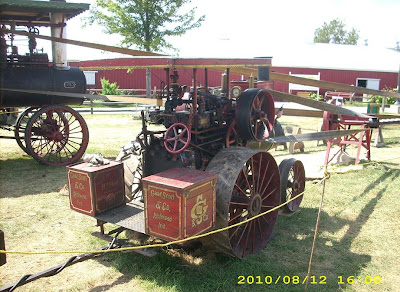 Notice the belts? They were doin' Actual Work; while my ring was being hammered round, a medium-sized traction engine was running a small sawmill, the fully-exposed blade over 3' in diameter and a powered "carriage" to run the tree being turned into planks through the blade! Not quite as dangerous as it sounds: take three men to run it, a "engineer" to shift gears and two to load the timber, and the operating positions keep you well away from the most dangerous parts. An inattentive fellow could still get himself luridly injured, so it's a good thing the crew was experienced.

Below, less than half of the field'o'tractors. Tam and I were quite taken with "Junior," at the center: 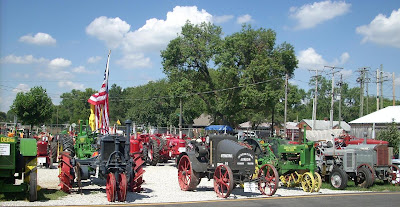 People talk about the need for public transportation in Indy. If they'd relegate the buses to long-haul and run these in a series of criss-crossing straight-line routes downtown, they'd be handy as can be. ...I suppose it's not slick enough for the complainers. Okay, it's no monorail, but by golly, it's distinctive. Cable cars, the El, a subway? Pfui! Our system would run...like a Deere! 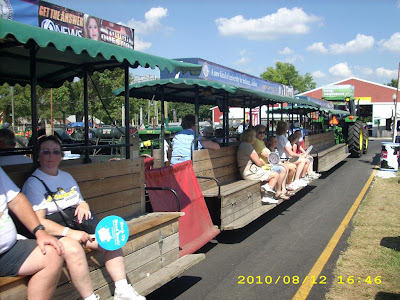 I don't know how they do it at your state fair but at ours, we've got the trolleys that share space with pedestrians. They run two slightly differing clockwise routes through the fairgrounds, sometimes inches away from people and booths, and without accidents. I'm pretty sure most of the guys driving them are farmers, possibly retired. Seventy-five cents gets you a seat and if you're silly enough to ride all the way around a few times, that's your lookout.

More photos later, including a few I'll reserve for Retrotechnologist!
Posted by Roberta X at 10:49 PM

Email ThisBlogThis!Share to TwitterShare to FacebookShare to Pinterest
Labels: Geekery, marvels of science, the wonderfulness of life

Very nice! We have locomotives and passenger rail cars at the State Fair of Texas. Unfortunately, (Un)Fair Park, that wonder of Art Deco architecture is evicting them to Frisco, which has its own rich railway history.

You should come down in September. Besides, concealed carry is perfectly acceptable at Fair Park.

You just missed the big steam and power show in Battle Ground, Indiana:

Lots of guys with beards and hats that can fix anything with paper clips.

All the cool kids know that Tippecanoe County is where it is at . . . now if we could define "it".

We have 3 days of nothing but steam and gas power on display every August near Baraboo. Friend of mine has a Case steam tractor, and it's but one of many to be found in our part of the Wisconsin woods:

Neat-o! Thank you for taking all the photos and the time to put together the write-up.

I like tractors and steam engines. I'm not so fond of trains.

Oh, they have their uses, but I've spent a fur piece of my life next to a track, and had a family member die to one, and I've never much appreciated the slow cacophony.

I could, if I had the money and room, get very deep into old tractors, though.