Went tearing home last night, late and in the teeth of a gale. It rained so hard that when I raced into Fresh Market on the way (playing Beat The Clock against their closing time), the raindrops hurt, and that was with the hood of my sweatshirt over my head.

I was grabbing goodies for breakfast. Ended up this morning with this: 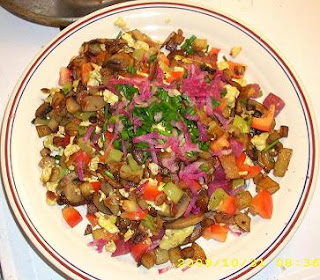 While setting a land speed record(Produce Department subcategory), this thing caught my eye. 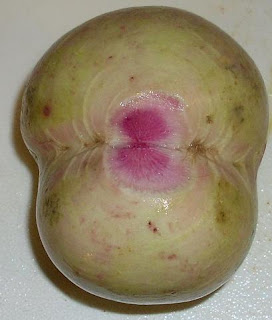 Looks a bit scary, doesn't it? It's a Watermelon Radish, with a mild-horseradishy bite. How we get from the second photo to the first one goes like this: 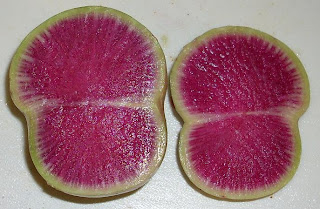 First, a closer look at The Radish. Whoa! It's big for a radish, too, about the same size as a medium potato. Think of it as a turnip with a real bad attitude. 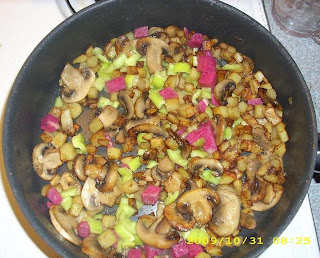 Diced and added to mushrooms and potatoes, with a nice Anaheim pepper chopped up and tossed in for crunch and flavor. D'ya think Tam (presently elsewhere) would try it if we told her the radish was raw beef? 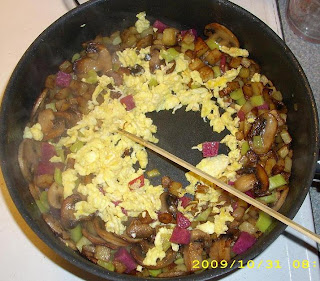 Scramble a couple of eggs in it.... 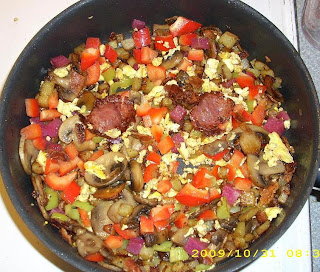 Add the bacon I started the skillet with back in, plus three thin, warmed slices of salami all smashed up and some diced red bell pepper for a touch of sweetness and crunch. Warm all the added ingredients, decant onto a plate and... 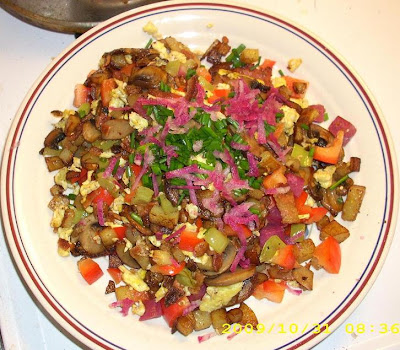 Taa-daa! I snipped some chives over it and grated a little more of the watermelon radish, too, mostly for color.

Fried the bacon with fresh-ground pepper, tossed a little all-purpose Cajun Seasoning on the 'taters before cooking them and between that and the marvelous flavor of the purple-red radish (this one was really nice, not wasabi-sharp but assertive enough to stand out without dominating the other flavors), it needed not a thing extra.

Yum! I suppose Breakfast Hash using whatever I stumble over at the grocer's is my signature dish and a lazy one at that, but I wouldn't trade it for all the tea in China -- or all the cordon bleu in France, either.
Posted by Roberta X at 10:12 AM

Wow!
That looks, and sounds, delicious.
Save some for me!

Why does the watermelon radish cause me to flash on a Georgia O'Keefe painting?

Seriously, that looks good, but it would require a beer or two with breakfast! It meets the minimum bacon requirement for sustenance but with the hot stuff, simply cries out for beer and a football game on the tube..

I had two pieces of leftover pizza.

While I am back in the arms of southwestern Ontario, I think my jet-lagged body still yearns for the Left Coast. (I know ... I know ... it's only three hours of time difference but it really messes me up.)

That item for brunch would have made adjusting much more fun.

(Oh ... had cold pizza myself. Brigid and I must be linked somehow.)

As you are to me, Brigid!

Ed: it's spicy enough but not especially hot -- I was thinking you in particular would want to throttle it up a little, maybe add a few Serranos.

Turk: count on it. I'm not sure about availability of those crazy radishes but they're certainly something I'll look for now!

This was one of the best things about the old "hippie market" (Sunflower, sadly gone) and now Fresh Market: they introduce me to new foods! I miss the wonderful little "cherry bomb" peppers from Sunflower, key ingredient to a really fine tuna salad.

I considered some more-exotic mushrooms but decided to try just one new thing at a time. Maybe tomorrow!

Seems like all women gunbloggers are all smart, pretty, interesting and wonderful cooks? Why, oh why?

And be careful of those "exotic" mushrooms, Roberta....might make for a REALLY interesting "...Starship" episode, lol.