It Isn't Paranoia When They're Out To Get You

So, the Chicago de facto handgun ban is headed for the Supremes and by The Most Amazing Coincidence, another B.S "study" paid for by the Joyce Foundation pops up, claiming if you own a gun you're more likely to get shot; various and sundry gun-banners show up on TV chat shows and newscasts and my very own local source of catbox liners pulls out all the stops with a Second Coming-sized headline on the front page of the Sunday paper, asking,
SHOULD MEN LIKE THESE BE ALLOWED TO
CARRY A GUN?
Complete with big mugshot-type photos of four scary-lookin' pals of Sumdood, at least three of whom (by the most amazing coincidence) just happen to be African-American, the story fills the middle third for the front page and sprawls across pages 16 and 17 of the first section, filled with scary, misleading graphics and troubling, contrived stats. 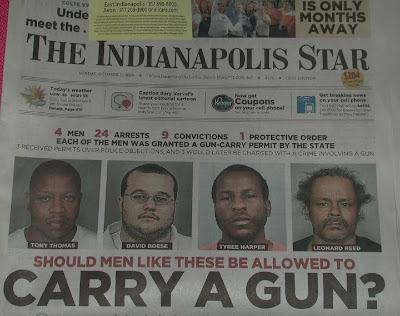 If you dig deep, they do admit to sifting through over 900,000 gun permits (including mine!) in (at least) two counties to come up with 211 supposedly iffy permit grants, four (4) of which they deemed bad enough to address in detail, three of whom have already had their License To Carry Handgun revoked for cause. It's difficult to be sure but it looks as if at least two of them were probably Lautenberged out of even buying a gun and all of them lied on their applications, at least by omitting criminal history and managed to slip through. Being criminally-inclined, they've since outed themselves by subsequent acts, meaning the system did, in fact, work.

The Star's gripe seems to be that State Police use the well-defined criteria for "proper person" in determining eligibility for a permit rather than the statute's vague "good character" clause (probably because they're only too familiar with getting tripped up by sloppily-crafted laws judges later hold to be unenforceably vague, but I'm only speculating). They're peeved ISP can't read minds and refuses to try.

We've got a major case headed to the highest court in the land and the Opposition is cranking up the hysteria machine; look for more stories like this and be ready to challenge them. This is a PR blitz, it is only beginning, and the goal is to marginalize and demonize gun owners and firearms. Don't let 'em get away with it!

Good news: according to the Red Star, one in 12 Hoosier males have carry permits, as do one in 41 of us wimmenfolk. That's a good start.
Posted by Roberta X at 10:55 PM

Now, the question is, how do we arm the other 11/40? Bonus points if you know the reference.

Nicolas Cage, in Lord Of War!

If the true concern here was public safety, they'd be wringing their hands over the easy access to alcohol and the damage done by a small minority in our society.

I don't know if it is just my browser, but they appear to have removed the photo. Can't imagine why they'd do such a thing....

I'd go so far as to say that if the true concern were public safety, they'd be a lot more worried about guns in the hands of the un-permitted gang-banger types than worrying about a tiny percentage of dodgy permits.

Bobbi makes a good point, though -- a valid carry permit isn't a permit to buy a gun without a waiting period and background check. Unfortunately the general non-toting public doesn't know that, and the fishwarp is capitalizing on that ignorance.

Both have the highest crime too.

And, I bet that they have the highest percentage of welfare too.

The number of permit holders in Indiana is nice. The percentages in Missouri is not near so high, but we can't really tell since the info is kept at the county level and they're not sayin'. As far as I know, the MHP keeps no records on the number of CCW permit holders.

I don't get this. I thought criminals wouldn't try to get permits. Obviously none of these people are criminals.

the networks proved then that pro-crime, anti-gun activists will lie where guns are concerned. In fact, ABC and CBS paid to lie, when they could have told the truth for nothing.

It's always good to have a dozen or six handy dandy all purpose fact filled letters to editors ready to insert particulars and mail.

Anon (or should I call you "Mike?"), most of them were not "prohibited persons" at the time they made application; many of them had been in trouble but not of the sort that Federal or State law defines as making a person unable to get a gun. They got in trouble later and, hey-presto, most lost their carry permits.

Indiana law makes no provision for carrying a handgun without a permit unless you are transporting it unloaded and "in a secure wrapper" to sell it, from buying it or to/from a gunsmith. Notce what's not on that list? --Taking it to/from a shooting range. So if you want to practice, you should get a permit. (In practice, carrying a handgun without a permit unloaded and in the trunk is usually okay, but an LEO is quite free to get sticky about it). This is one reason why Indiana has such a high percentage of permit-holders.

Wouldn't he left call this pulling a "Willie Horton"? Oh right they're allowed.

Are they racially profiling?