I can't be the first to have thought of this satirical artwork? 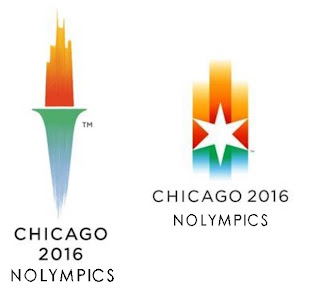 At left, based on Chicago's first effort, which...well, it can't have helped; Olympic rules don't allow using the torch in your logo until you have been Officially Picked. At right, the revised version is the basis. Either one would make a nice T-shirt, wouldn't it?
Posted by Roberta X at 8:00 PM

Email ThisBlogThis!Share to TwitterShare to FacebookShare to Pinterest
Labels: eediots, it's Art okay?, marvels of politics

Ironically, Atlanta's Olympic Bid logo was about a bajillion times better than its final official one.

That first one for Atlanta is pretty catchy. It has a bit of.. what? Imperfection about it?

So does the one on the right represent an implosion or an explosion?

Looked at in the right way, both appear to depict augering in. An Olympic torch, or a rocket plunging downwards at full throttle? And the other one is obviously a falling star.

The mascot of the 2016 Chicago Olympics was to be "Chalkie". I've seen the t-shirts in Chicago.

I'd wear a shirt with the second logo on it. But maybe the Os and 0s should be Obama logos?