News From The Hidden Frontier

- You should always check with the experts before using GLONASS to navigate a squirt-booster landing. Note the "mysterious crater" showed up in September '07 and the first new launch supporting/updating the Russian satnav system happened later that month. Coincidence?

- I have mentioned the "Agreement of 1989," which semi-offically ended hostilites between the Far Edge and NATO/USSF. Some operations took longer to wind down than others. The Edgers have long sought to expand their gene pool, not always tactfully. 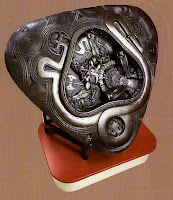 It does have that "Glocky" look, even if it's one artist's impression rather than the actual proto-CLASSIFIED from a bellship.

One or two new episodes of I Work On A Starship are coming soon!
Posted by Roberta X at 7:31 AM

I like it. It makes me think of the control console on a Goa'uld death glider. Only thing out of place is the swastika.

What's a GLONASS? Is that what happens when you get dragged by the legs across the parking lot while your sitting up? Or is that the WARMASS? Course if it gets warm, it probably glows too heh?

it's an oscillation overthruster of course.

Assrot, GLONASS is the Russian version of GPS. It went through some hard time but last I heard, they were working with India on bringing it back up to par.