Update: Tam showed up from her rounds today bearing more onions, a couple of Serranos and a large Poblano pepper, saying, "Make more!" So now we have photos.

I am on vacation this week; plans include:

A. Sleeping a lot and very late, along with

B. Painting the house.

As a consequence of the latter, it is of course raining and cold.

As a consequence of the former, I didn't get to the market yesterday and at dinner time, faced a quandary. We had eggs and canned hash, but that's pretty bland, plus it's a bit lacking in the "fresh veggies" department.

A quick fridge check turned up a generous handful of green onions that wanted using and Tam (who'd just got in from Tamming about, zombie control or visiting a lonely doggie or some such activity) reminded me we had a Serrano pepper or two left and our neighbor had a surplus of small hot peppers to share, too.

Aha! So, chop up the onions (I had about a third of a cup) and peppers (seed them as your tastes dictate -- I cleaned out the Serrano, as ours are flamin'-hot); take about a quarter of the onions and all of the peppers and saute in a large skillet with a bit of olive oil; set aside when the colors go bright and the onion is getting translucent. Plop the hash in the skillet, mash it out some, add all the onions and peppers and mix, then spread it out in a smooth layer. Break 3 to 4 eggs on it, whatever it takes to mostly cover; leave the yolks intact or break them as suits you. Sprinkle on celery flakes (or saute real celery in advance and add later), season the eggs with a dash of black pepper and whatever else appeals (Cajun seasoning, or Worcestershire, etc. or even nothing at all). 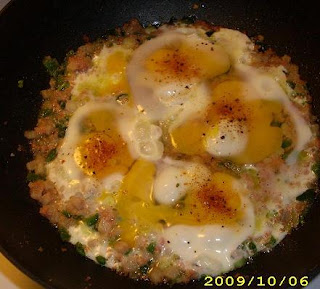 Cook uncovered over medium heat for five minutes or so ('til the egg whites are just getting white along the edges). 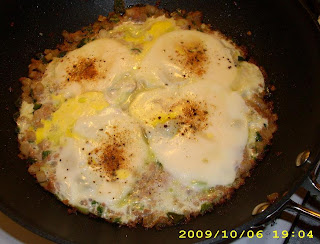 Then cover until the eggs are done (firm, opaque); uncover and let it steam out a bit, divide and serve. 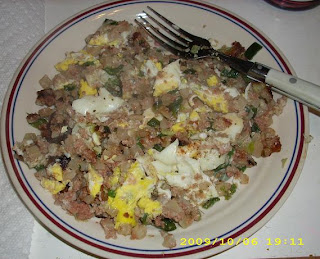 (I have now posted photos). I'd've posted photos last night but we inhaled the stuff. It's spicy enough without adding anything but not so spicy that the flavors are overwhelmed -- and that was one fat Serrano and a couple of Tabasco (?) peppers from next door. YMMV; adjust to suit your palate. (Just as good with two Serranos and a Poblano). And yes, it is by no means low-cholesterol. Better have oatmeal for breakfast. ...Sure does taste good!
________________
(I am reminded I'm overdue to cook up some corned beef brisket and make for-real c. b. hash with the leftovers and fresh taters. It's about 6X as good as the stuff in cans. Come to think of it, I could have the local market thick-slice some corned beef and start from there...).
Posted by Roberta X at 12:47 PM

Email ThisBlogThis!Share to TwitterShare to FacebookShare to Pinterest
Labels: Food, it's Art okay?

Nice lookin' mess of food there. I agree about the "hash" that comes in cans; personally, the smell and texture reminds me of canned dog food. REAL corned beef hash is a fantastic dish.

Do you cook yours in the oven, or in a pressure cooker? I've found that the pressure cooker does amazing things for a pre-packaged, store-bought corned beef.

Too bad Sally doesn't like corned beef or I'd make it more often.

You'll laugh, Nathan, but I just cook it on the stovetop in a huge stewpot, low, slow and most of the day. Comes out fantastic.

Normal New Year's feast for me is corned beef, cabbage with taters and carrots, plus black-eyed peas cooked up with bacon -- a kind of North/South mishmosh. One takes digestive pills beforehand. ;)

Bob: a mess of food it is! IMO, the "Mary Kitchen" brand hash (corned beef and, delightfully, roast beef) is about the best -- we used up some "Food Club"* hash that had been on the shelf awhile for these experiments and it came out okay.

When I was younger and lazier, I'd add frozen or canned mixed vegetables to canned hash. It's actually pretty good -- also filling, fast and cheap.
___________
* "The first rule of Food Club is, you talk about Food Club." New house brand at a local supermarket chain.

Ahhh, you booted it! Just when I was going to complement a mid-Westerner for cooking with Serranos and Poblanos, you go and talk about a neighbor's "tabasco pepper".

That's what she (The Democrat) calls them. I have not the least idea -- small, bright-red when ripe, and entirely too mild. Our flower-bed Serranos c'n whup 'em without even havin' to try.