Another nice small show, at the equally nice county fairgrounds in Lebanon. A couple of tables of inexpensive knives were the only Tam-eyebrow-raising items: no stuffed plush toys or off-target frou-frou at all.

There were several interesting collector guns; I passed up an H&R .32 revolver (pretty) and a .32-Short Colt (blueing about half gone, possibly 'smithed on to shorten the barrel) but not an H&R 622, a six-shot "pull pin" .22LR plinker from 1958.

(It appears Bill Goforth, the SME who'd written one book about Iver Johnson firearms, was working on a book covering H&R; with his passing in 2011, there's no telling if/when it will be published). Someone has probably (re?) plated this example but they didn't buff it excessively -- besides, it really is a plinker/kit gun.

I also picked up a couple of boxes of .32-20, 'cos -- fun! Reloads Brand-spankin'-new in a plain white box from a trusted source and a box of Ultramax cowboy cartridges. The latter from one of Tam's arcane-caliber friends, a nice young man who, as nearly as I can work out, has shot every cased round for which both gun and ammo can still be found or who will eventually do so. With a big smile. (That guy, at a gun show and, I'll bet, the range, is one of the happiest and most contented of men you could meet. And does he ever know ammo!)

Leaving the show, we encountered this: 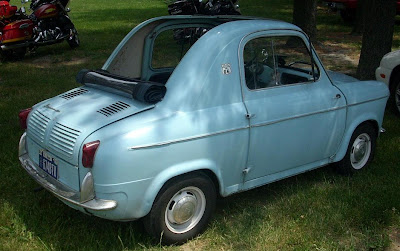 The owner (who, note stickers, has driven all of Route 66 in it) was kind enough to let Tam and me try it on for size. 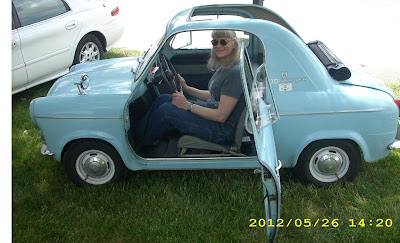 I don't know that this 16-hp beauty would be any tougher to drive than my ex's Suzuki Samuri, for which the drill was essentially to firewall the throttle and work your way up to the proper gear. The Vespa would win on mpg -- and probably looks. Cute! Here's the cockpit, with fewer gauges than many Vespa scooters. The GPS is a nice touch. 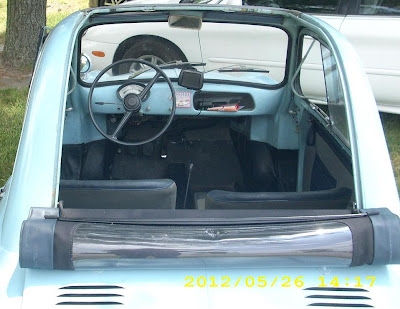 It appears that Mason's Used & Rare Books is gone; driving around the square had us thinking the town's been pretty hard-hit by the economy, though I think the mod to this sign was a low blow and highly undeserved. 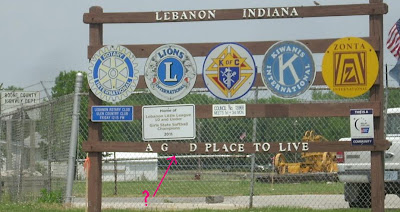 (It is also brazen, as it's well inside the "Hey, you" perimeter of the County Sheriff's facilities.) 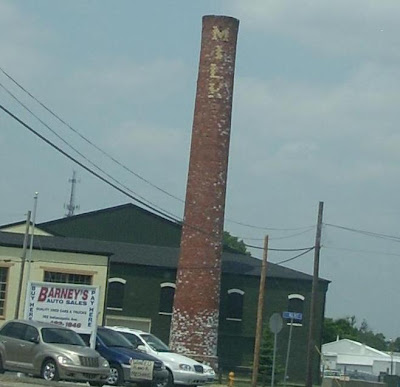 Refurbished dairy? (Turns out maybe we should have gone 'round to the front of The Milk Building! But we'd've had to have called first. Live and learn). Also, it used to say "WILSON'S" above "MILK" but that part broke.)

We took Highway 32 over to Westfield, passing the interesting Victorian House Dining, in a nice 1800s cottage with a Model A parked outside! That's a place I'd like to check out.

Speaking of Fords, there's a very late Model T up at the Roush budget lot where Dog & Suds used to be. ($9500, says the nice man.) 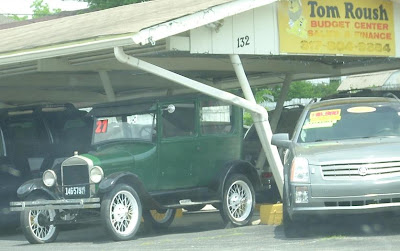 Alas, a T: with controls unlike anything you've ever driven, unless you've driven a Model T. But it sure is purty! Could use a little air, I think. (I just checked and Country Classics has sold the trucks of my dreams, Ford Model As with electric start and other mod. cons. Do want!)

On the "want" front, where does one go for a nice frosty mug of the pure quill? Triple XXX in Lafayette, I guess, but that's something of a long drive for root beer alone. (OTOH, totally not a safe search term all by itself. Never mind that: I'm told it's the righteous brew and the name has a long, honorable history.
Update: Frank W. James reminds in comments that the venerable Dog'n'Suds brand is still/again around and has returned to the good old "World's Creamiest Root Beer" formula. Yum! A&W -- a dependable standard -- has morphed into a very modern chain of eateries and even the B-K stands are still goin' strong, if not quite as numerous as they once were. Root beer stands: not vanished. You just have to drive out past I-465 into Real America to find most of 'em. (Indy's own Mug'n Bun is an exception to that rule -- and they brew their own!)

Stopped at Main Street Shoppes in Westfield to look the place over -- they've got a few Edgar Rice Burroughs books and always have interesting stuff. (A nice 3-row Underwood portable -- the MacBook Air of the 1920s, there's one in the title at Retrotechnologist -- and an almost-new L. C. Smith upright caught my eye. My Mom learned to type on the latter, which has the return lever on the right side! She says it was convenient but made for a habit to unlearn: every other manual has the return on the left). We looked at guns, dishes, games and toys of everyone's youth and even an assortment of bits and drivers for a brace...which went home with me.

And then on to the other interesting feature of the Shoppes: Big Hoffa's Barbeque. 100% ninja-free, properly cooked over fire and darned good. Even sweet tea! (And trust me, antiquing with the faint aroma of barbeque floating by is a pleasant experience. Big upgrade from the usual "antique" scent!) Of course we had a bite to eat. Yum!

...Both of us hit by headaches on the way home, mine very bad. So I've been napping. Better now!
Posted by Roberta X at 8:50 PM

Pray tell, what year was the Vespa? JohninMd(help?)

Sounds like y'all had a great day! And good root beer is HARD to find!!!

I did not know Vespa made cars! I would love to have seen the engine, and how the spare tire (if any) was stowed.

Eric, Google is your friend. Though I've yet to find a photo of the spare, stowed in a "well" under the passenger seat and the 2-cylinder engine is largely hidden by air ducts!

It sounds just like a classic 2-stroke Vespa, Rrringg-ning-ning!

Sounds like a road trip to LayFlatte is in order.
Tam can let loose some .41 downrange and you can soothe your rootbeer fix.

Some day, I hope to get over your way, just so I can go on a road trip with you. You do a better job of finding cool stuff than I.

Best root beer in a bottle (IMHO) is Henry Weinhard's.

And, I'm so glad to see at least one other person on the planet is using 'fewer' where it's called for.

OMG B&K. Growing up, I drank many a root beer with my Dad at the South Broadway B&K in Peru, Indiana, often on the way back through to Indy from visiting my Granddad in Denver.

Really takes me back.

So how many clowns exited the Vespa...

That Vespa looks like an escape pod for a full-size pickup truck.